Where are the high risk malaria zones?

Malaria is present in roughly 100 countries around the world. It affects mainly the tropical regions of the world, as this is where mosquitoes are most prevalent. The map below indicates the regions where there is a high risk of malaria. 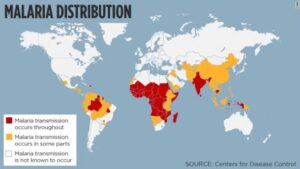 These high-risk regions are endemic in different strains of malaria therefore the preventative treatments would be dependent on the country being visited. In some parts of the world certain antimalarial treatments cannot be used due to the presence of resistant strain of malaria.

The World Malaria Report published by the World Health Organisation (WHO) stated that in 2013 there were approximately 198 million cases of Malaria worldwide, which led to 584,000 deaths. It is estimated that 90% of the deaths occurred in African countries.

5% off all services - Please use the code PROMO5 in the cart. Dismiss